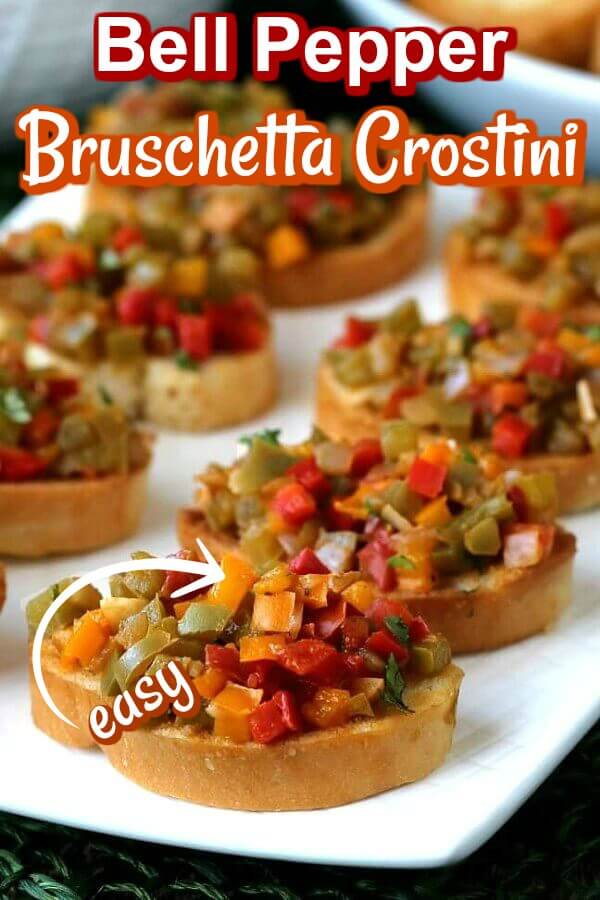 Here's an Easy Bruschetta Recipe like you've never had before. Colorful sauteed bell peppers are the star and they are finished with so many flavors. Bruschetta Crostini is a crowd-pleasing appetizer that works perfectly for elegant dinners, holidays and game day. 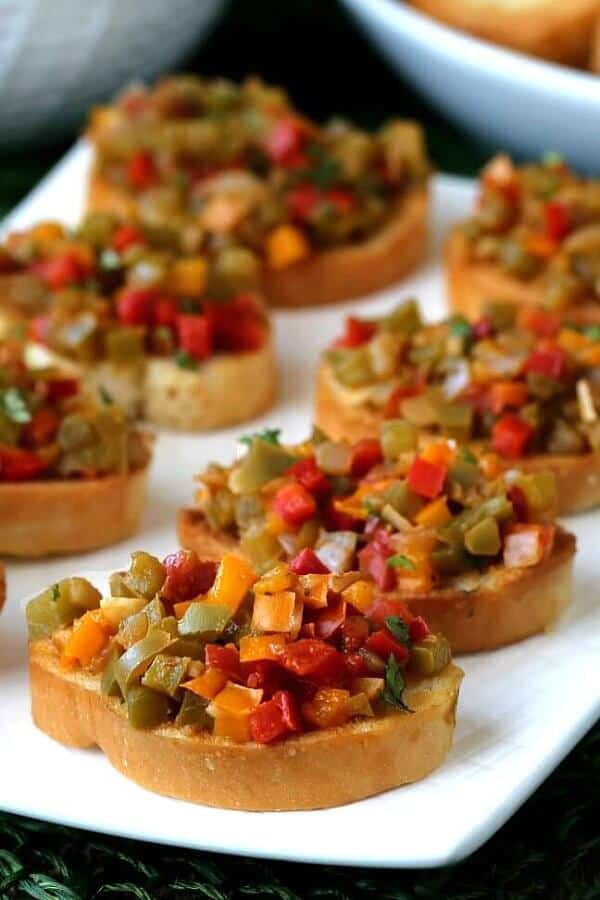 Bell Pepper Bruschetta Crostini is a crowd-pleasing appetizer that would work for elegant dinners, holidays and game day.

Easy to look at and delicious to eat this bruschetta can also be used as a dip with pita or tortilla chips.

We have 'dipped' before and I'm sure we will again 'cause - it's good! I never use less than 4 bell peppers for this recipe because the recipe freezes really well.

True, it's always gone if company comes over but I even make it for just ourselves.

You don't have to buy expensive imported balsamic vinegar either. Every bottle I've ever tried has been delicious so just use one that you would use for your own salad dressing. 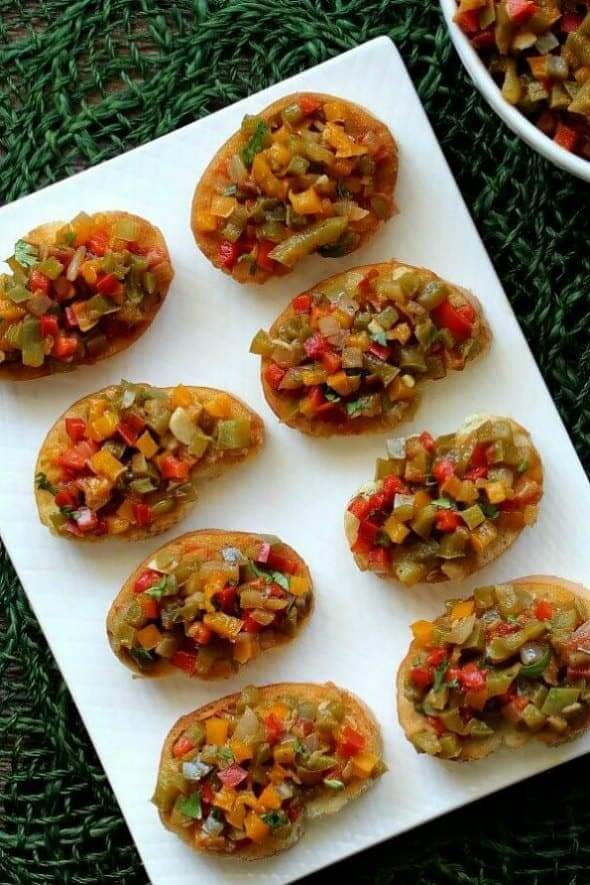 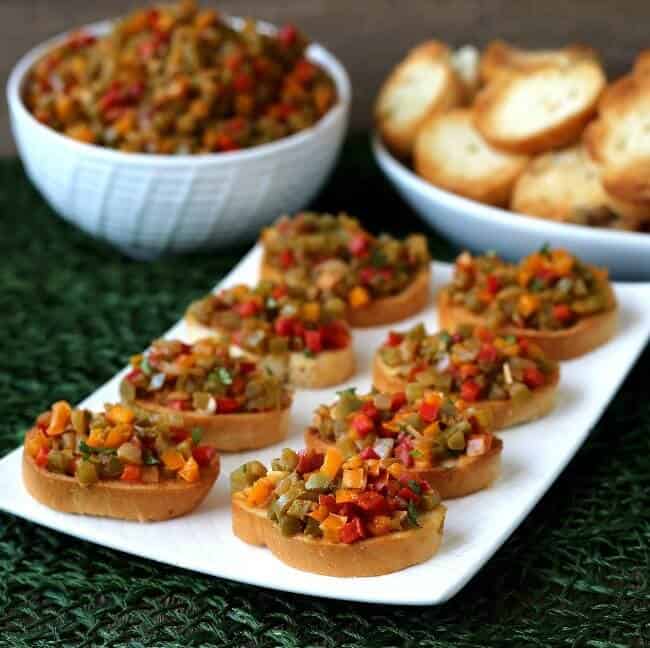 It is so worth making and something to share with friends!

Crostini translates to "little crusts" in Italian - singular crostino.  It's an Italian appetizer consisting of small slices of grilled or toasted bread and toppings.

The toppings may include a variety of different vegetables but they can be presented more simply with a brush of olive oil and herbs or a sauce.

I love the new silicone brushes that you can brush on the bread before toasting.

Just line up the slices on a baking sheet, brush lightly with extra virgin olive oil and broil for a minute or two. Don't walk away! 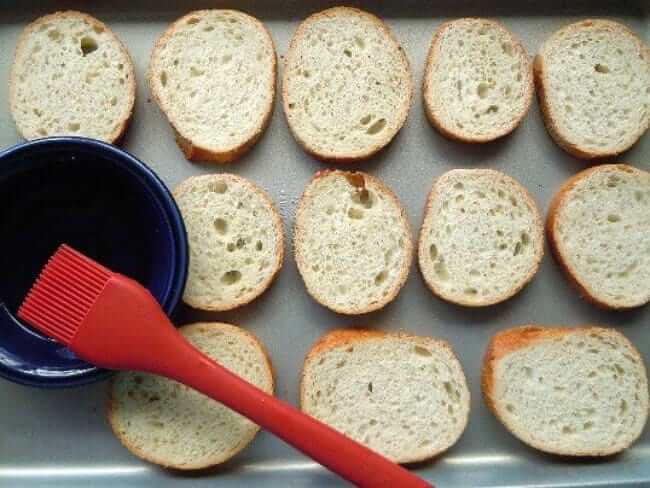 Remember how I mentioned using this bruschetta as a dip? It's delicious and I've served it just like this at a game day party.

It got scooped up and devoured using tortilla chips. Below is a photo of another time I served it but I had a little bit of fresh cauliflower in the fridge.

I cut it up really small and sauteed it along with the bell peppers. Delicious and beautiful. Here's a photo. 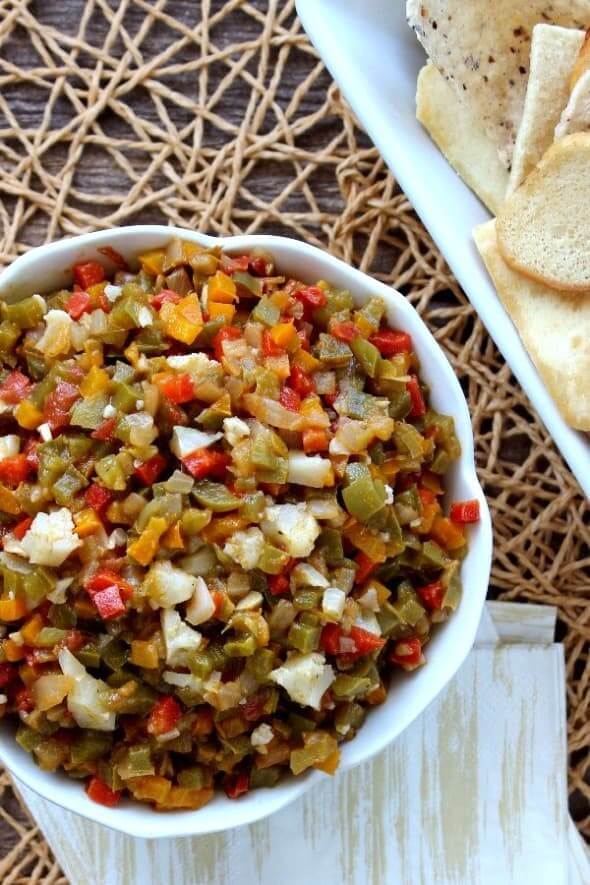 And just in case you want to serve it with other easy-to-make dips for your grazing table, then you might also like:

Artichoke Chipotle Hummus which can also be spread on crostini toasts or used as a dip.

Here's a classic Tomato Bruschetta that is so dang good.

As an Amazon Associate, I earn from qualifying purchases. This post contains affiliate links. Read my disclosure policy here.

What Do You Think?

If you take a photo of your flavorful easy bruschetta recipe, follow me over on Instagram and tag me on your photo @vegan_in_the_freezer. I'd love to see it!

And if you'd like to leave a star rating along with a comment, it would really be appreciated. 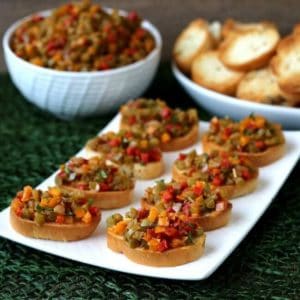 When serving - if you have any extra fresh basil you can sprinkle some over the tops for garnish. TO FREEZE: Cool completely to room temperature. Put in a freezer container and freeze up to 3 months. TO PREPARE AFTER FREEZING: Remove from the freezer and put in the refrigerator for 6-8 hours. Zap in the microwave for a few seconds to take the chill off. Prepare the crostini toasts as described above. Put some bruschetta on each toast and serve. 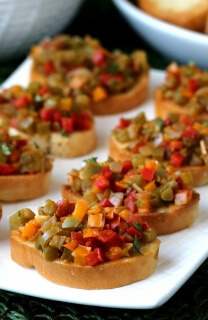 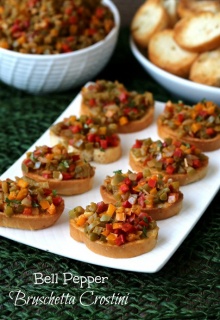