Vegan Bread- Light and airy on the inside, crusty on the outside. It's perfect as a snack, sandwich bread, or a side with soup or salad. Who needs store-bought bread when homemade crusty vegan bread is so easy to make? This vegan bread recipe is made with just 5 pantry staples and couldn't be any more delicious.

Bread is a food that is enjoyed by people all around the world. It's typically made with flour, water, and yeast. Did you know that bread is one of the oldest foods in the world? Homemade bread was first created over 10,000 years ago! Today, many different types of bread are available, from white bread to whole wheat bread to vegan bread. Bread is a versatile food that can be eaten on its own or used as the base for a sandwich. It is also a popular ingredient in many recipes. Whether you like your bread plain or with a little bit of vegan butter, there's no doubt it's a delicious food everyone can enjoy, and it's so easy to make at home!

There's nothing quite like the smell of homemade bread wafting through the house. The warm, yeasty scent is enough to make your mouth water, and the taste is even better. Homemade bread is definitely a labor of love, but it's so worth it when you take that first bite. The crusty exterior gives way to a fluffy, soft interior; every bite is pure bliss. Whether you enjoy your bread plain or topped with butter or jam, homemade bread is sure to satisfy you. So next time you're in the mood for something special, give homemade bread a try. You won't be disappointed.

Delicious- Homemade vegan bread recipe is incredibly easy to make and tastes delicious. It has a slightly crunchy crust and an airy, light interior perfect for sandwiches or snacking.

Made From Scratch-  Homemade vegan bread recipe is made from scratch using simple ingredients like flour, water,

Easy-To-Follow Instructions- It's a simple, easy recipe that everyone can make. The best part? You don't need any special equipment- just some basic kitchen items.

Versatile- This easy vegan bread recipe is versatile in every way. You can make it sweet or savory and vary the ingredients to make different flavors.

What Is Vegan Bread?

Vegan bread is a type of homemade bread made without using any animal products, such as milk, eggs, butter, or honey. Vegan bread is an excellent option for those following a vegan lifestyle, as it is 100% plant-based. You can enjoy it plain or topped with vegan butter, jam, or other toppings of your choice. Whether you're a seasoned vegan baker or just starting out, this homemade bread recipe will become one of your favorites!

How To Make Vegan Bread

I used to be terrified of homemade bread because it sounded so difficult, but I decided to give it a go anyway. Much to my surprise, the process was much simpler than I thought!

In a large bowl, mix together the dry ingredients. Then, add water and olive oil. Stir until dough forms. Once you have a dough, knead it with your hands until smooth. Place the dough back in the mixing bowl and cover it with a clean kitchen cloth. Set aside 2-3 hours to allow it to rise; it should double in size within that time frame.

After the dough has risen, take the edges and fold them towards the center to create a ball. No more kneading is necessary.

Add the dough to the baking dish and let it rise for another 30 minutes. Then, use a serrated knife to make cuts on top of the dough.

Bake the bread for approximately 30 minutes.

After the bread is cooked, allow it to cool completely. Once cooled, slice and serve as desired.

What to Serve/Pair With 5-Ingredient Vegan Bread

Homemade vegan bread is excellent for sandwiches, toast, or just by itself. It also pairs well with soups and salads. Top it with homemade jam, marmalade, or nut butter for extra flavor- the possibilities are endless!

You can also use this homemade vegan bread to make French toast or croutons.

If you're looking to switch up the flavor of homemade vegan bread, there are lots of easy options. Here are some popular substitutions and additions:

With so many possible variations, this homemade vegan bread recipe will become a staple in your kitchen!

Can homemade vegan bread be made in a bread machine?

Yes, you can make homemade vegan bread in a bread machine. Just follow the instructions on your particular machine.

Why do you have to let the dough ride for so long?

Can vegan bread be made without yeast?

Yes, you can make homemade vegan bread without yeast. Just replace the yeast with baking powder and baking soda.

Yes, homemade vegan bread is much better than store-bought! It's more flavorful and fresher, plus you can customize it to your tastes.

Can homemade vegan bread be frozen?

Don't Forget To Come Back And Let Me Know How Your Easy Homemade Vegan Bread Turned Out! 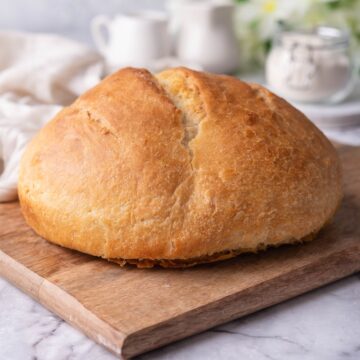 Ligia Lugo
With only 5 ingredients, you'll be surprised at just how easy and delicious vegan bread can be. It's light and fluffy inside with a crispy crust on the outside.
5 from 1 vote
Print Pin Recipe Save Saved
Prep Time 15 mins
Cook Time 30 mins
Inactive time 3 hrs
Total Time 3 hrs 45 mins
Servings 8
Calories 210 kcal