This creamy homemade maple cinnamon vegan compound butter will add a sweet surprise to any dish.  The combination of maple syrup and cinnamon gives it a cozy fall flavor.  With just a few ingredients, you’ll be able to whip this up in no time!

If you’re like me, you like recipes that are simple and that will pair with a variety of foods.  This sweet compound butter recipe is easy to make and is a versatile spread.  Use it to top dinner rolls, sweet potatoes, cornbread, toast, or anything that could use a sweet, smooth, yummy vegan topping.  There’s no sugar-coating it - the flavors in this compound butter are sure to make just about everything better!

One of my favorite aspects of this recipe?  You don’t need to use many dishes, meaning easy cleanup!   You’ll only need a couple of things to make this maple cinnamon butter.  Here’s what you’ll need:

Ingredients For Your Maple Cinnamon Butter

Step 1: Mix all ingredients together in a large bowl until well blended.

Step 4: Chill in the refrigerator at least 24 hours before serving.

What to Serve/Pair with Your Maple Cinnamon Compound Butter

You’ll be hard-pressed to find something that this spread won’t taste good with!

This smooth, sweet butter is a delicious topping for sweet potatoes.  Use it to make a devilishly sweet loaded sweet potato with vegan marshmallows or add it to a sweet potato mash.  Sprinkle some extra cinnamon on top for a tasty extra kick.

This sweet vegan compound butter spread is also yummy on any type of bread.  Serve it as a side with rolls at dinner, or eat on toast at breakfast.  It’s very versatile!  Wanting to pair it with a sweet, fall cocktail?  Anything that you eat with this topping will pair well with a caramel apple martini - yum!

The best way to store this sweet vegan butter is in the fridge.  To keep it fresh, make sure that it is in an airtight container.  It will last up to 2 weeks in the fridge (giving you plenty of time to try it on different things!).

If you aren’t ready to use it yet, this butter can also be frozen for up to 6 weeks in a sealed container.

To thaw it, place it in the fridge for 24 hours.  You won’t want to store this compound butter at room temperature.  If it is not cooled, the maple syrup will begin to separate from the butter - we don’t want that to happen!

Technically yes, but I’ve found that it tastes much better with unsalted butter. Just a reminder - be sure that it is softened before you try to mix! Your arms will thank you.

Can I melt this sweet vegan compound butter spread?

You won’t want to melt this spread. The maple will separate from the butter, and it just won’t taste as good as it would if it was served chilled.

What is the best kind of maple syrup to use for this recipe?

You can use any kind of PURE maple syrup for this spread. Artificial syrup just isn’t the same. Pure syrup has a darker color and a smooth, rich, sweet taste. You’ll be glad that you didn’t skimp on this part - take my word for it!

Can I adjust the amount of cinnamon?

You can definitely adjust the amount of cinnamon based on your personal preference. I’d recommend starting with just a pinch and tasting as you go until you reach the taste that you like.

Don’t Forget To Come Back And Let Me Know How Your Maple Cinnamon Vegan Compound Butter Turned Out! 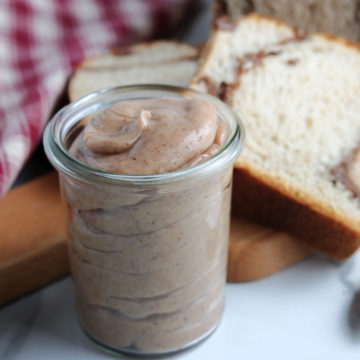