×
You are here: Home / Soups and Stews / Vegan Cream of Celery Soup with Coconut Milk
Jump to Recipe -

Cream of Celery Soup is something that I always like to have in my kitchen.  It can be used as a pasta base, mixed into a casserole, or even just eaten on its own on a cold winter day.  I always kept the cans in my pantry but knew that there had to be a better option.  This recipe gives you a dairy-free, vegan version of this soup that is super tasty and can be kept in the fridge for several days and in the freezer for even longer so that you can use it multiple times.

This vegan cream of celery soup is easy to make and can be used in so many other recipes.  It only requires a few ingredients, and you probably already have most of them on hand.  Just combine vegetable broth, vegan butter, coconut milk, and flour for a soup mix that can be used in other recipes or enjoyed as a light, creamy soup on its own.

Why You’ll Love This Vegan Cream of Celery Soup Recipe

Ingredients For Your Vegan Cream of Celery Soup Recipe

How To Make Vegan Cream of Celery Soup with Coconut Milk

To make cream of celery soup at home, you’ll want to saute your celery in your vegan butter until translucent. Once sauteed, set aside and melt the remaining butter in a saucepan, add flour, and whisk. Add in the remaining ingredients and simmer until it starts to thicken. Remove from heat and let cool for storage or serve!

One of my favorite things about this cream of celery soup is the many ways that it can be enjoyed!  I love to have a bowl of it with rice mixed in or with a French baguette to dip in it.  It can also be used as a base for your favorite pasta dish or as a replacement for other cream soups, such as cream of mushroom.

Does it matter what kind of dairy-free milk that I use for this cream of celery soup?

You can use your favorite dairy-free milk for this recipe, and I just happen to think that it tastes the best with coconut milk. If you use a milk beverage with added protein, these tend to separate when they cook, so that is something that you may want to check for.

What about the flour? Does it change the taste if I use anything other than all-purpose?

This is another personal preference, but yes, using a different flour will change the taste. All-purpose will give you the classic taste that you’re looking for. Chickpea flour is probably the best tasting gluten-free option that we’ve tried, but you could also try rice flour. I will say that you should not use coconut flour for this recipe - the substitution measurements are not equivalent, so your soup may end up being too thick or thin.

Is cream of celery soup healthy?

Don’t Forget To Come Back And Let Me Know How Your Vegan Cream of Celery Soup with Coconut Milk Turned Out! 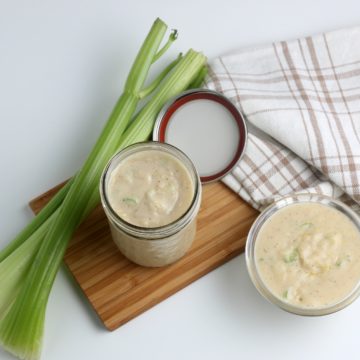