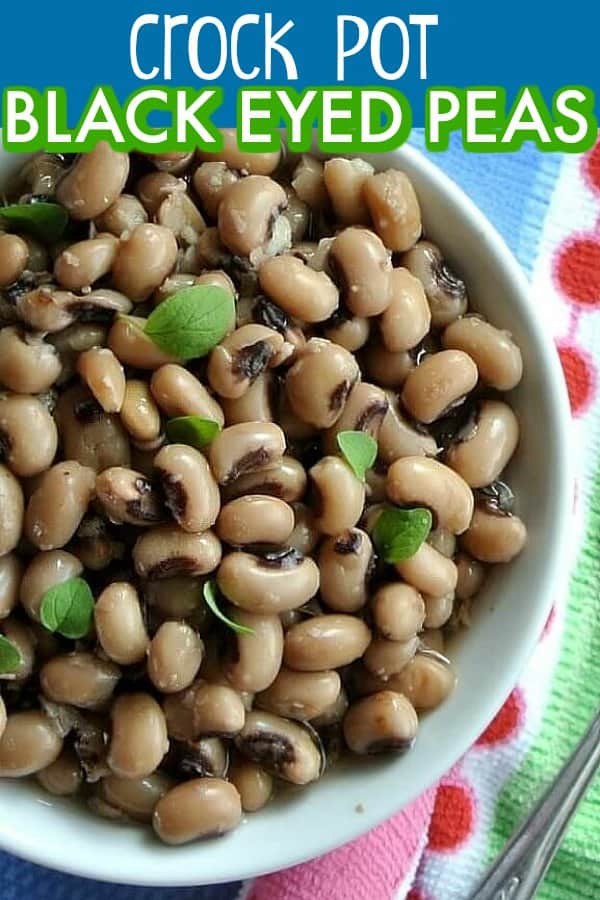 Crock Pot Black Eyed Peas are easy from a slow cooker! A side dish tradition to have on New Years day too. You'll have a lucky day for every bean you eat. Really! 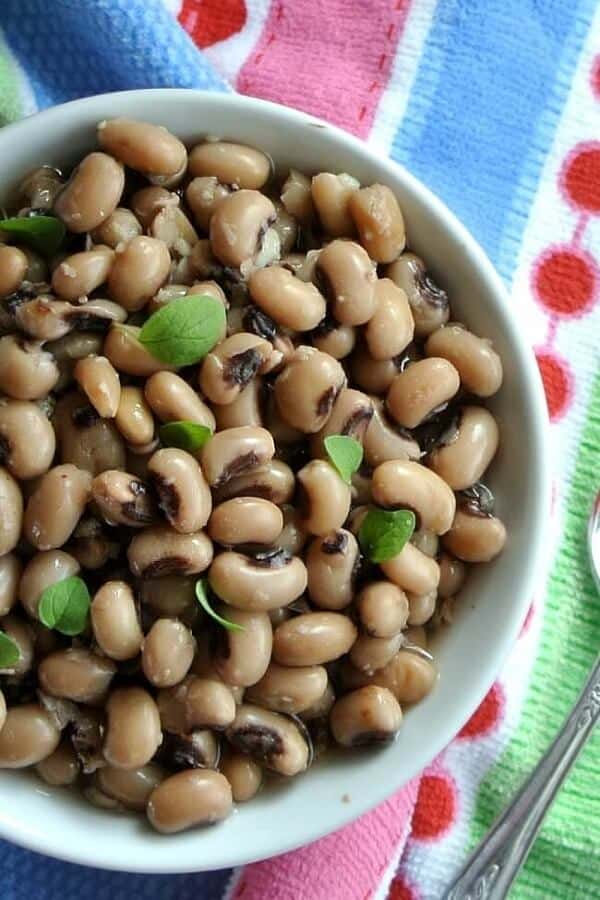 Good luck abounds with Crock Pot Black Eyed Peas and the way I have heard the tradition is that for every bean you eat you will have good luck for a day. Luckily they are small beans so you can eat a lot.

I have made a vegan version and it has all the flavors of the original. Very simple to make especially when it is made in a slow cooker.

The leftovers are as good as they are on the first day.  That helps if you are serving these on a holiday and your family likes to eat early. That was our family's tradition.

Take a peek at all of the different styles of photos that I have for these black-eyed peas. You can tell we really like them as I've taken quite a few photos of at different serving times.

Kind of wish I did but then it would have to be outside since we downsized by 1000 sq. ft. 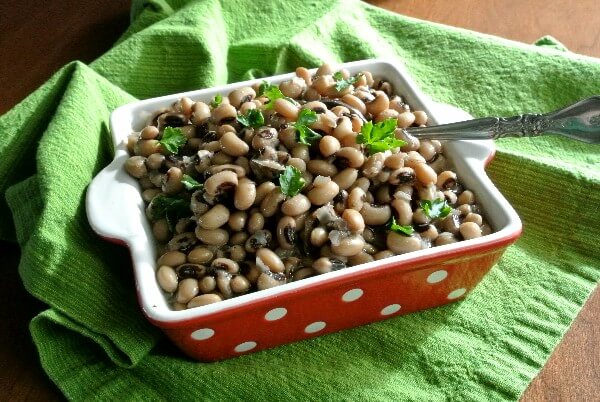 From the first of the year on through the months Slow Cooker Black-Eyed Peas is a delicious recipe that adds a nice change to the usual.

Bonus:  Over the years I've discovered a sauce that you can dollop on black-eyed peas and it almost makes it another meal.

It is Roasted Red Pepper Sauce for Beans. Not made from beans but made FOR beans. Here's a picture and it is such a delicious condiment. 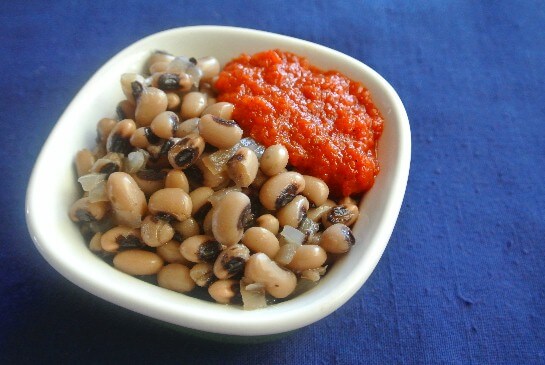 I just needed to tell you about it so you don't miss out on this in your lifetime. The sauce is made with roasted red bell peppers and it is great on bean burgers too.

I'd love to give you some special hints and tips for making these black-eyed peas from the slow cooker. but they are just too easy.

I do dice the onions very small so that the small beans aren't overpowered by a large chunk of onion.

Do you have a programmable crockpot yet? I don't but this it would make life a whole lot easier if you could program it an hour or more after you've left the house. 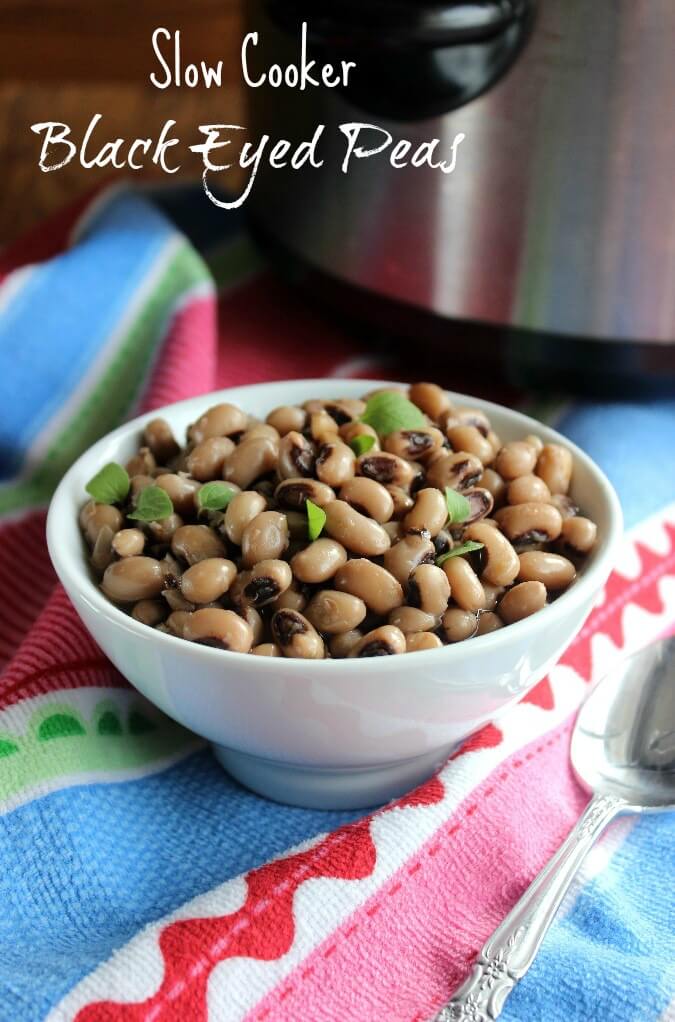 The instructions are so simple that I don't need to go into more detail here on how to cook black eyed peas.  The complete and easy directions are in the recipe card.

Below is a photo that doesn't really show the preparation of black-eyed peas. It shows their beauty after draining. Also, you can probably tell I am using a vintage colander.

It was my mother's and I grew up watching mother use it - a lot. It is mine now and I cherish it. Even though it has a dent on its underside. 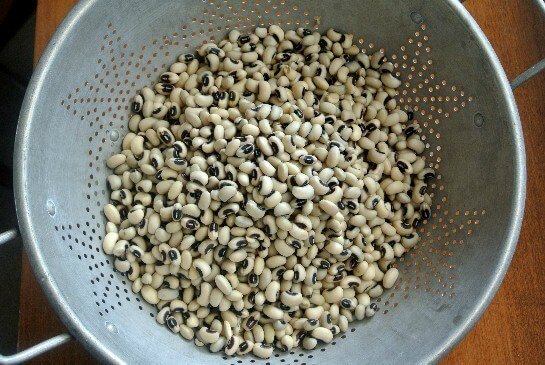 So pull out your slow cooker, black-eyed peas, a few veggies, and spices. You'll have comfort food for the whole family in no time. 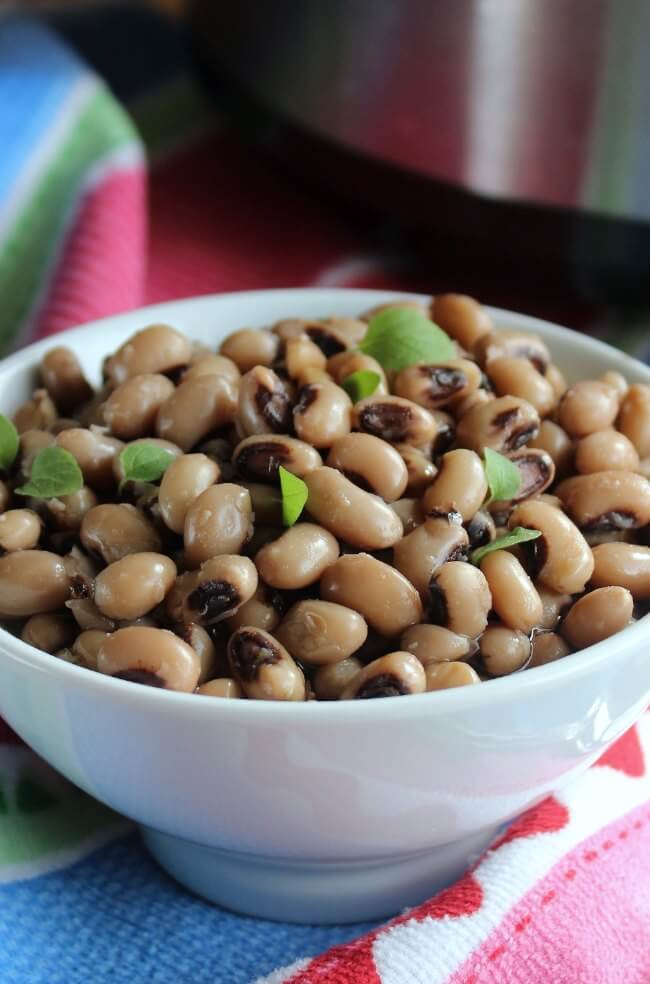 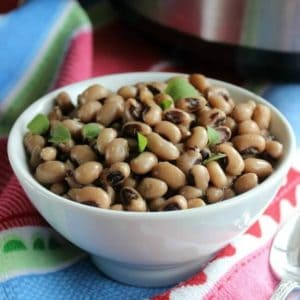 Ginny McMeans
Crock Pot Black Eyed Peas are easy from a slow cooker! They're a tradition to have on New Year´s day too.  You will have a lucky day for every bean that you eat. Really!
5 from 12 votes
Print Save Saved
Prep Time 15 mins
Cook Time 6 hrs
Total Time 6 hrs 15 mins
Course Main Dish, Side Dish
Cuisine Crock Pot, Slow Cooker, Vegan
Servings 6 Servings
Calories 262 kcal

The night before cooking:

The morning of cooking: